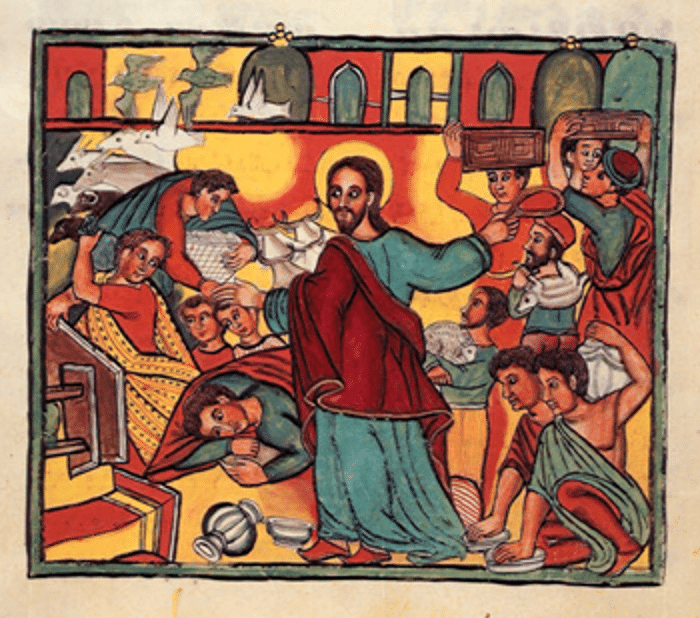 Welcome to the second of our Holy Week meditations, based on the book by Stephen Cottrell “The things that he did, the story of Holy Week”. Today we will have a look at what is traditionally called “The cleansing of the Temple” where Jesus drives out the merchants and the money changers. This very famous episode is found in all 4 gospels. While the 3 synoptic authors put the episode towards the end of their Gospels, John puts it at the very beginning of his book, mainly because he has a very different theological agenda.

So today we will concentrate on Mark’s text, in chapter11:

15 Then they came to Jerusalem. And he entered the temple and he began to drive out those who were selling and those who were buying in the temple, and he overturned the tables of the money changers and the seats of those who sold doves; 16 and he would not allow anyone to carry anything through the temple. 17 He was teaching and saying, “Is it not written, “My house shall be called a house of prayer for all the nations’? But you have made it a den of robbers.” 18 And when the chief priests and the scribes heard it, they kept looking for a way to kill him; for they were afraid of him, because the whole crowd was spellbound by his teaching.

Jesus challenging authority was not new: He challenged the Pharisees, the rich Sadducees, the big absentee-landlords and even, indirectly, the Roman occupiers through his enigmatic parables. He even defied the Law – or at least the Letter of the law – but the Temple … that really took the biscuit that day. The temple constituted the essence of Jewish faith and identity in both a literal and symbolic manner with its commercial activity, its huge crowds of worshippers and its architectural splendour: The house of God no less …

So imagine the surprise felt by the people minding their own business in the court of Gentiles when they suddenly see the rabbi from Galilee, eyes blazing, displaying a frenzy of rage, overturning the tables of the money changers, lifting them with both hands and sending them crashing to the ground, pushing everybody away, gold and silver coins tumbling to the floor, doves and pigeons escaping and soaring into the sky … “You have made this house of prayers a den of robbers” he shouted, defiant and breathless, like a man possessed … And he was indeed possessed … by God… like the prophets of old.

What an extraordinary scene Mark paints for us, a scene which has captured the imagination of many painters and has also exercised the interpretation skills of many commentators and preachers! Often, we were told that Jesus did what he did, because he was incensed at the sacrilege of it all. But this is not the reason. When Jesus enters the Temple compound at the beginning of Pesah, he finds what one would expect during a pilgrimage festival. Nothing is out of order at this point as the money changers and animal sellers were perfectly legitimate and absolutely necessary for the Temple normal functioning. That buying and selling took place in the Court of the Gentiles and money changers were needed because neither the animal offerings nor the temple tax could be paid with the Roman currency, because it had pictures (read “graven images”) of the Roman Emperor. So, the money had to be changed into usable local currency. And buying animals on site was the only way pilgrims could be sure they were ritually pure for sacrifice.

So why does Jesus interrupt the Temple perfectly legitimate sacrificial and fiscal activities? For 2 reasons:

First what Jesus is condemning is not the Temple sacrificial system but the corruption and the exploitation of the poor which was at the centre of that commerce as the money changers would not only exaggerate the fees they charge for the transactions but also inflate the exchange rate. As far as the animal sellers were concerned, they also exploited the situation by inflating their profits and therefore robbing people. Besides, they were doing this with the complicity of the Temple authorities. So, Jesus’s spectacularly prophetic act is about JUSTICE and the Reign of God.  As a good Jew, he was not advocating doing away with the institution of the Temple and the priestly class, but he was condemning what they had become and what they did routinely, i.e. exploiting the poor.

But this leads us to the second layer of interpretation: if the Temple system was that corrupt, unjust and exploitative and had become a den of robbers, it was not God’s house any longer so it did not deserve to survive and had to be destroyed. It is always important in the Gospels to know what precedes and what follows, and, in this case, it is very important as Mark often puts a pair of incidents together that are intended to be interpreted in light of one another. Here the Cleansing of the Temple is placed between the cursing of the fig tree and the withering of the same fig tree. This intentional framing is Mark’s way to tell us that what happened to the fig tree will happen to the Temple. So as a prophetic act, it means that Jesus is shutting down the Temple, not literally but symbolically. It is not a cleansing but a symbolic destruction. This is why, as he is overturning the tables, Jesus explicitly quotes Isaiah 56:7 to emphasize that he is influenced by the tradition of the Hebrew prophets. God’s desire has long been for “a house of prayer for all the nations,” not a corrupt religious institution that is complicit with, or oblivious to the plight of the poor and marginalized.

A question for us today is therefore whether we are willing to take the same risks that Jesus took, to seek not only individual change, but also institutional change. This shift is both vital and risky. As the Brazilian archbishop Dom Helder Camara used to say, “When I give food to the poor, they call me a saint. When I ask why the poor have no food, they call me a communist.” In moving from inclusive table fellowship to action against the Temple, Jesus shifted from the controversial but less radical practice of eating with the wrong sort of people, to confronting an institutional system that creates and entrenches inequality and injustice.

Dear Lord, we heard how Jesus wanted to restore the Temple to a house of justice and prayer , Help us to cleanse ourselves of all selfishness and to open our heart even wider so we can do justice, love kindness and walk humbly with you. Amen.